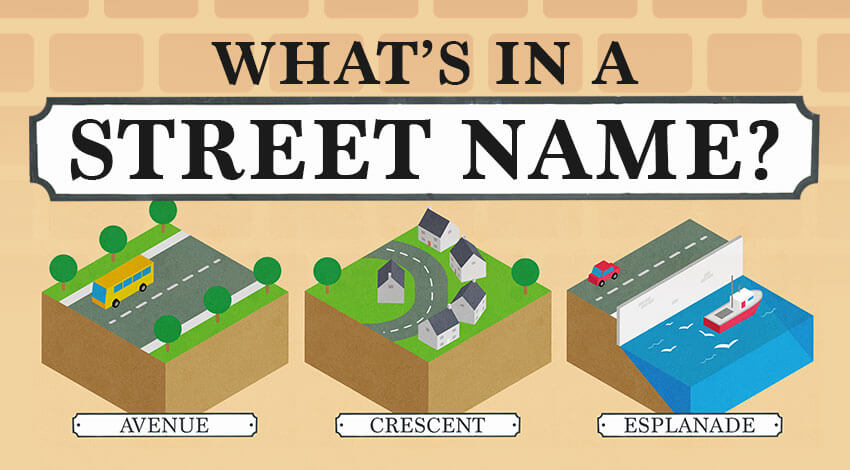 Have you ever given a thought to the road you live on, or the streets you walk down every day? What gives them their names and makes them what they are? No doubt you’ve seen roads, streets, avenues, lanes and closes all before. But have you considered what these naming conventions mean?

We’ve taken a look, and there is a logic behind the names. Understanding what this is can help you get around places you’re not familiar with. So, here’s the run-down on what’s what.

What is a Road?

The definition of a road is a thoroughfare, route or way that connects two points. Simple! That’s why we see so many of them around.

What is a Street?

A street is a public road that can be found in a city, town or a village. It typically has houses or other buildings on either one of both sides.

What is a Lane?

Lanes are common in rural areas. They tend to be narrow and are sometimes winding too!

What is an Avenue?

An avenue is a broad road with trees along its sides. It is usually found in a town or city.

What is a Way?

A way is a small side street that turns off another road or street.

What is a Drive?

A drive has a different meaning in the UK and the USA. The UK meaning of drive is a private road which allows access to one or a group of structures. These structures are privately owned by an individual or group.

In the USA, a drive is a road that’s defined by a nearby geographical feature, like a mountain or lake.

What is a Crescent?

A crescent is a street or terrace of houses that forms an arc. Both ends of a crescent usually join the same main road.

What is a Close or Place?

A close or a place is a residential street that doesn’t have through access for vehicles. Another name for this type of road is a cul-de-sac.

What is a Court?

A court is much like a close or place in that it’s also a dead end with no through access. However, a court is so-called because it is a circle or loop shape, rather than straight.

What is an Alley?

An alley is a small pathway between buildings. It may or may not be possible to drive down an alley.

What is a Wynd?

A wynd is a narrow street or alley that turns off a main street. These are common in Scotland and Wales.

What is an Esplanade?

An esplanade is a road that runs by the sea. It is also known as a promenade.

What is a Mews?

A mews is a row of houses that have been converted from stables. Houses built to look like stables can also be called a mews.

What is a Terrace?

Now, that covers all the basics! What else is there to know about streets?

What are the most common street names in the United States?

The reason for “Second” and “Third” streets being more common than “First” is that some cities do not have “First” streets — naming them “Main” or “Front” (in communities with river, lake or railroad line frontage) instead, or renaming them after historical figures.

What are the most common street names in the UK?

Interestingly, Main Street is more common in Scotland than High Street and Church Lane is almost unheard of in Scotland AND Wales.

So now you know a lot more about the streets and roads around you. Perhaps you’ve learned something you didn’t know about the place you live or somewhere you like to visit. Keeping an eye on the names as you’re out on a walk could be a fun and educational game to play with kids, or might be enough to stop you hitting a dead end when you’re trying to get somewhere. What you do with your newly found street knowledge is up to you!