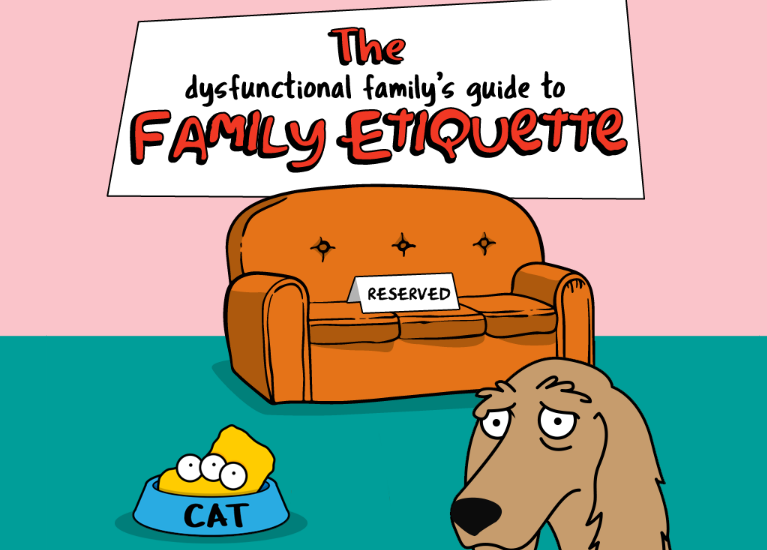 Families. Can’t live with ‘em, can’t live without ‘em. We love them to bits, but they also drive us crazy. If it’s not Dad hogging the remote, then it’s your sister clogging up the bathroom cabinet with toiletries. Cue a minefield of potential arguments.

But don’t worry, here at Vibrant Doors, we’ve got the scoop on navigating your way through family life. From grabbing the best seat in the house for the next episode of Doctor Who to never being the one to take the bin out, we present our dysfunctional family’s guide to family etiquette…

When it comes to the living room, there’s a lot of first come, first served going on, and if you’re not quick off the mark, then you’ll lose out on both the remote and the good seats. It’s a fraught issue, with over 50% of Brits admitting to arguing over the remote. The only way to watch what you want is to get there first.

And don’t even think about making a move on that prime seat when Mum gets up. The dog’s already got his beady eyes on it. Relinquish the throne, or put up with puppy-dog-eyed reproachful looks all evening.

Time for refreshments. Unfortunately, if your seat happens to be the one nearest the kitchen, you’re on drink and biscuit duty. Again. And of course nobody will want the same thing. Dad will want another beer, Mum’ll want a cup of herbal tea, your sister will ask for a fancy hot chocolate (preferably with marshmallows), your other half will want a glass of wine and your brother will request a coffee. Oh, and the dog’s water bowl will need filling too.

All of which will leave you wondering why you can’t just make a big pot of tea and get back to watching Corrie. To console yourself, you’ll have a sneaky biscuit (or seven).

Time for a quick shower and freshen-up before dinner. It’s the unwritten rule of showering that you have to clean the plughole before it blocks up (yuk!). Nobody wants to take a shower standing in 2 inches of dirty water, after all …

As for loo roll, it’s only polite, once you finish a roll, to hang a new one. And, according to science, the only correct way to hang toilet paper is with the end over the roll. If you hang it the other way, it’s more unhygienic as you risk leaving bacteria on the wall, and it also uses more paper. So, make sure you do it right!

It’s a truth universally acknowledged that the bathroom cabinet consists of 95% female toiletries and 5% toothbrushes. OK, so these are completely made up stats, but not too far off the mark. Good luck to Dad when finding somewhere to stash his 10-in-1 Dad Cleaner…

Navigating family meals can be fraught with tension. The best way to get through them is to smile sweetly and compliment the chef on his or her cooking skills. Never, ever let on that the roast chicken is dry and the potatoes are harder than bullets.

Thankfully, here’s where dogs and cats come in useful. If you really can’t eat what’s on your plate, quietly sneak bits to your pets under the table. Do it gradually enough and Mum will never notice. But be sure to leave just a bit on your plate though – otherwise she might think you want seconds!

In most families, the bin gets emptied when it’s full, but not in your family, oh no. Every piece of rubbish is an entry into a battle of wills that only ends when someone topples the whole lot. So be careful – whoever sends that tower crashing down takes the bin out.

It takes skill and poise, but you balance that empty crisp packet on the top. You’ve won this round. For now.

It’s amazing how quickly the room empties when there are dishes to be washed. Mum’s cooked the meal, so she’s out as far as the washing up is concerned. Dad claims to have done it last time (although you’re fairly certain he hasn’t wielded a washing-up brush since the turn of the millennium), your sister is all of a sudden very dedicated to her schoolwork, and everyone else has apparently discovered a life-threatening allergy to soap. Which leaves you. Or the dog.

Time to head to bed. But what’s this? Duvet Hog (otherwise known as your significant other/your child/the dog/the cat) has got there first and is doing their best impersonation of a starfish. You’re left to try and cram yourself onto a sliver of mattress six inches wide. Over the course of the night, your sleeping companion will assume many forms, including the “burrito” (uses 100% of available duvet) and the “snail” (just like a giant baby!).

Eventually you drift off to sleep, ready to navigate the minefield again in the morning…