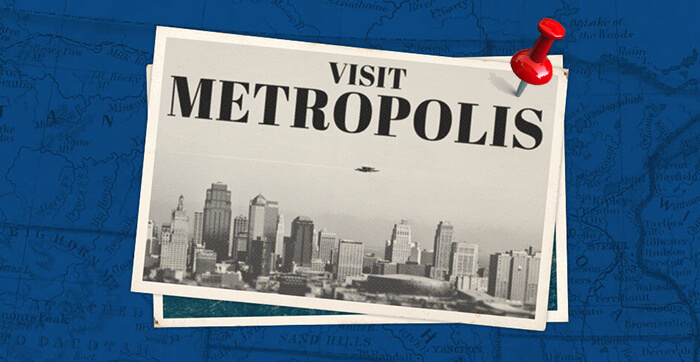 Some of the world’s best-loved films, TV shows and series all take place in towns and cities we’re familiar with. But many of these places are figments of our imagination, vehicles and backdrops that help a story to unfold and capture our imagination.

The setting for a good story is as crucial as the characters that inhabit it. Wherever that fictional place may be; be it small town America or the dark and brooding alleys of Gotham City, the key factor is always believability. With that in mind, it’s no surprise that some of the most famous movie, TV and comic book locations were inspired by real life locations.

So where would these places be, if they really existed in today’s world? How would we find the homes of our heroes? Where might we travel to visit Superman’s hometown, where’s South Park, or Quahog? We’ve scoured the internet (and our comic book collection), following the clues and fan theories to pinpoint the real life locations of some of fiction’s greatest places. Check out our interactive map to discover where your favourites are situated. Enjoy!

This fictional city appears in many comic books and is well known as the home of Batman. The look and feel of the city are said to be influenced by cities like New York and Chicago. However, references in the comics actually place Gotham in New Jersey. If Gotham were a real place it might be in the vicinity of Philadelphia, somewhat further down the coastline from New York.

Although Metropolis is located close to Gotham City, just across the harbour, in fact, it is depicted as the antithesis of Gotham. Superman’s hometown is wealthier and less corrupt than Gotham City, and its closest real city would likely be Baltimore or Washington.

The town of Quahog houses all the Family Guy cast and has always been rooted in Rhode Island. Recent revelations put the exact location as the town of Cranston, the third largest city in the state.

These are just a few of our favourites. We’ve also located Hill Valley (Back To the Future), Central City (The Flash), Springfield (The Simpsons), Hawkins (Stranger Things), Twin Peaks (Twin Peaks), Alexandria (Walking Dead), Basin City (Sin City), South Park (South Park), Vice City (GTA Vice City), and Amity Island (Jaws). Next time you’re watching you can try to picture your favourite fictional places in the real world and see if this changes the feel of the place from your imagination or strengthens it even more.